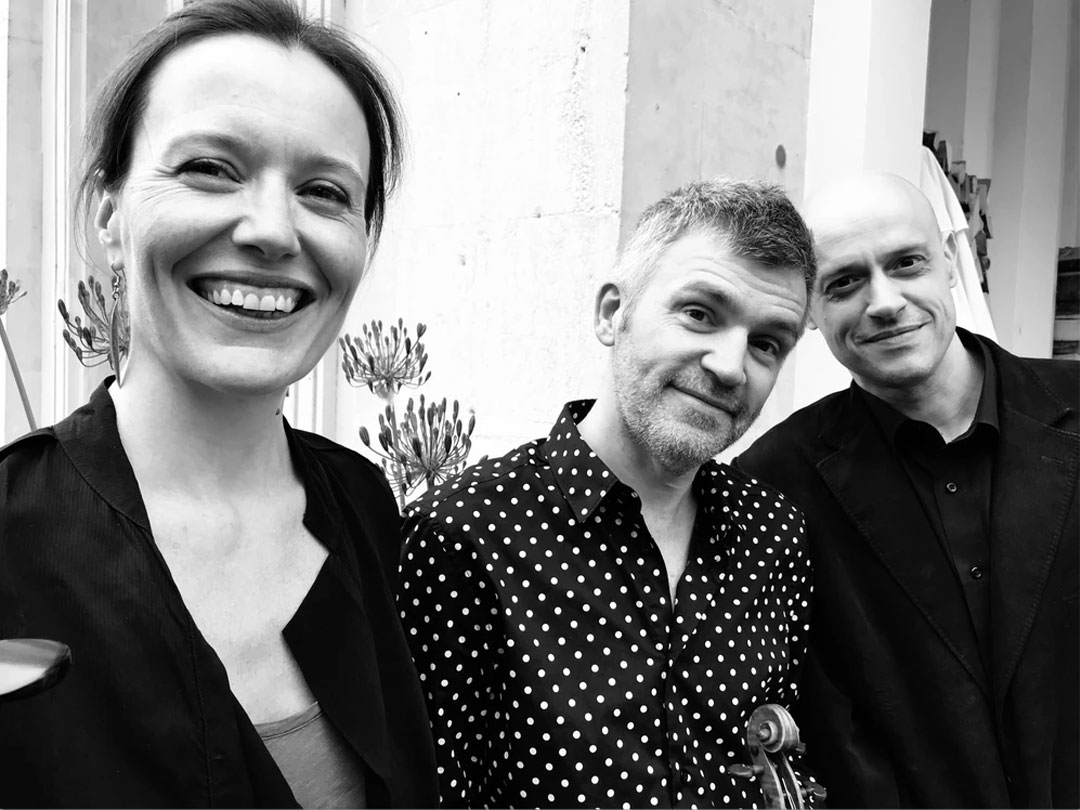 Three outstanding soloists and chamber musicians with a long history of collaboration have assembled their curatorial expertise and musical experience to form the Le Page Trio –breaking boundaries with unique and inventive programming, presenting the piano trio repertoire in a new light.

David Le Page was born in Guernsey and gained a place at the Yehudi Menuhin School, aged eleven. He was a prize winner in the BBC Young Musician of the Year and the Yehudi Menuhin competitions. He studied in Bern with Igor Ozim and in London with Sidney Griller. He has worked with a diverse selection of artists and ensembles as a director, soloist and chamber musician and has formed his own groups the Le Page Ensemble, The Harborough Collective and Mysterious Barricades.

David has made many recordings including the complete Tippett quartets, Shostakovich quartets, Keith Tippett’s piano quintet Linuckea, music by Gerald Barry, Vivaldi’s Four Seasons, Frantic Mid-Atlantic with Evelyn Ficarra, The Rune of Hospitality’ with Mark Chambers and the Goldberg Variations with Le Page Ensemble. He is Artistic Director of the Orchestra of the Swan, the Stratford-upon-Avon based chamber orchestra, with whom he regularly appears as soloist and director. He was recently appointed President of the European String Teachers Association.

Viv McLean won First Prize at the 2002 Maria Canals International Piano Competition in Barcelona and has performed in all the major venues in the UK, as well as throughout Europe, Japan, Australia and the USA. He has performed concertos with orchestras such as the RPO, Philharmonia, LPO, ECO, Halle Orchestra, BBC Concert Orchestra, National Symphony Orchestra, Orchestra of the Swan and the Northern Chamber Orchestra under the baton of such conductors as Daniel Harding, Wayne Marshall, Christopher Warren-Green, Owain Arwell Hughes, Carl Davis and Marvin Hamlisch.

As well as playing with the Le Page Trio, Viv plays regularly with the Adderbury Ensemble and has also collaborated with groups such as the Leopold String Trio, Ensemble 360, the Ysaye Quartet, the Sacconi String Quartet and members of the Elias, Allegri and Tippett Quartets. Viv has appeared at festivals including the International Beethoven Festival in Bonn, the Festival des Saintes in France, Vinterfestspill i Bergstaden in Norway and the Cheltenham International Festival in the UK. He has recorded for labels such as Sony Classical Japan, Naxos, Nimbus, RPO Records, ICSM Records and David’s own label- Harmony & Imagination Records. Viv has also recorded regularly for BBC Radio 3 as well as for radio in Germany, France, Australia, Norway and Poland.

“Viv McLean revealed extraordinary originality, superb simplicity, and muscles of steel hidden by fingers of velvet. He plays with the genius one finds in those who know how to forget themselves, naturally placing themselves at the right point to meet the music, this mystery of the moment.”

Clare O’Connell is passionate about playing and curating chamber music. She plays with Lontano, The Storytellers Ensemble, The Harborough Collective, Aurora, Loki, and Propellor Ensemble as well as the Le Page Trio. She founded and curates Behind The Mirror: her own series of intimate concerts in Berkhamsted, experimenting with varying instrumental line-ups, making her own arrangements of a vast array of music for unusual groups of instruments, and interweaving poetry and storytelling to add another dimension to the concert experience.

Clare’s arrangements have been performed in Westminster Abbey, the Wigmore Hall and on BBC radio 3. She regularly plays all over the UK. Recent highlights include a performance in the Wigmore Hall of her own arrangement of The Lark Ascending with Daniel Pioro. Future plans include a solo performance in ‘An Elephant in the Garden’ at Shakespeare’s Globe’s storytelling Festival. She is a graduate of Wadham College, Oxford, where she studied Ancient & Modern History, followed by postgraduate study at the Royal College of Music & the Hochshule für Künste in Bremen, Germany with internationally acclaimed cellist and teacher Alexander Baillie.