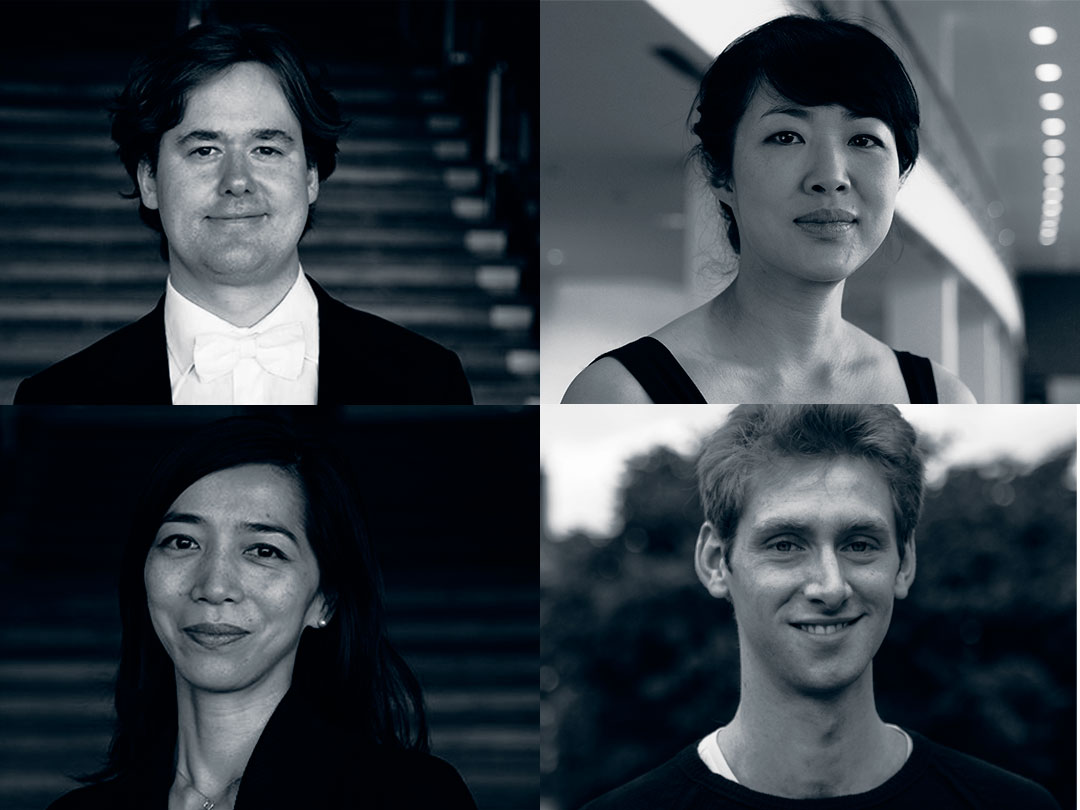 Members of the Philharmonia Orchestra performing:

Philharmonia concert master Benjamin Marquise Gilmore grew up in England and studied with Natalia Boyarskaya at the Yehudi Menuhin School and Pavel Vernikov at the Vienna Conservatory, as well as with Julian Rachlin, Miriam Fried, and members of the Artis quartet and Altenberg trio. His father was the musicologist Bob Gilmore and he is the grandson of conductor Lev Markiz.

Benjamin was awarded first prize at the Oskar Back violin competition in Amsterdam, and was a prizewinner at the Joseph Joachim competition in Hannover and the Mozart competition in Salzburg As a soloist, he has performed with the Amsterdam Sinfonietta, the NDR Hannover, the Rotterdam Philharmonic and the Munich Chamber Orchestra.

A member of the Chamber Orchestra of Europe since 2011, Benjamin was appointed leader of the Scottish Chamber Orchestra in 2016. He performed with the SCO as soloist and director on several occasions and has been involved in the SCO’s chamber music series at the Queen’s Hall in Edinburgh. He has also appeared as guest leader with the Royal Liverpool Philharmonic and City of Birmingham Symphony Orchestra, and as leader and director with the Camerata Salzburg.

Philharmia associate leader Rebecca Chan was born in Melbourne and studied violin with Alice Waten at the Australian National Academy of Music and Sydney Conservatorium and with William Hennessy at Melbourne University, where she also completed degrees in Medicine and Arts.

Rebecca has played as soloist with many of Australia’s major orchestras, including the Melbourne Symphony Orchestra; Adelaide, Tasmanian and Canberra Symphony Orchestras; Orchestra Victoria; Melbourne Chamber Orchestra; and the Australian Chamber Orchestra. She has been the winner of the string section, and Nelly Apt Scholarship in the ABC Young Performers Awards, the ANAM concerto competition and the Australian Concerto and Vocal Competition, and was a prizewinner at the International Citta di Brescia Violin Competition.

As a chamber musician, Rebecca has toured Australia, Europe and Asia, and has played in numerous festivals around the world. She is a member of the Australia Piano Quartet and the Hamer Quartet (winners of the first prize, the audience prize and Musica Viva award in the 2009 Asia Pacific Chamber Music Competition).

Principal viola with the Philharmionia Yukiko Ogura was born in the beautiful and historic city of Nara in western Japan. Having studied the violin at Kyoto City University of the Arts, she won a position as a member of the Kobe City Chamber Orchestra, which specialises in string repertoire.

Encouraged by Nobuko Imai, Yukiko became more interested in the viola, eventually giving up the violin completely in order to study with Mazumi Tanamura in Tokyo. She emigrated to the USA in 2000 and continued her studies there with Li-Kuo Chang at Roosevelt University in Chicago. She became the violist of the Eusia String Quartet, which subsequently won the gold medal at the Fischoff National Chamber Music Competition in 2001. In the same year, Yukiko was appointed a member of the Chicago Symphony Orchestra. Her passion for the chamber music repertoire has remained the mainspring of her life.

During her tenure in Chicago, Yukiko appeared as a chamber musician with members of the CSO, and with artists such as Pinchas Zukerman, Lynn Harrell, Joseph Silverstein, Arnold Steinhardt, Lang Lang and the Vermeer Quartet. Yukiko joined the Philharmonia Orchestra In 2015.

Philharmonia cellist Richard Birchall read Music at Cambridge University and studied as a postgraduate cellist at the Guildhall School of Music and Drama in London under Louise Hopkins. He later completed studies in film music composition at Goldsmiths College.

Richard pursues a varied and colourful career as cellist, composer, arranger and orchestrator. As a member of the Philharmonia Orchestra he performs regularly in the great concert halls of the world. He has appeared as Guest Principal cello with the Philharmonia, Royal Philharmonic Concert Orchestra, Northern Sinfonia and Irish Chamber Orchestra, and as concertmaster of the London Cello Orchestra. Richard’s solo and chamber work has ranged from Wigmore Hall to the catwalk at London Fashion Week. He is a founder member of cello octet Cellophony – now firmly established as the UK's leading cello ensemble – and cellist of the Minerva Piano Trio.

Richard's arrangements and compositions have been performed at the BBC Proms, Royal Festival Hall, Wigmore Hall, The Purcell Room, The Sage Gateshead and throughout the UK, and have been broadcast on BBC Radio 3, Classic FM and French and German national radio. Richard has completed numerous transcriptions for Cellophony’s core repertoire, and has produced commissioned arrangements for the Doric, Barbirolli, and Tippett quartets (including Psycho Suite, subsequently released on the Signum label), the London Cello Orchestra and the Ernest Read Symphony Orchestra.

In recent years Richard has turned increasingly to original composition. Recent works include Labyrinth for cello and chamber orchestra; The Wind in the Willows for eight cellos and narrator (premiered in London with actor Simon Callow); Delirium for two violins; a second string quartet, Hands; and a set of cadenzas for Mozart's Flute & Harp Concerto, premiered by Samuel Coles and Catrin Finch with the Philharmonia Orchestra under Michael Collins.

Richard has served as Deputy Chairman of the Philharmonia, and currently sits on the Artistic Committee of the Park Lane Group and the Advisory Board of MusicArt London.