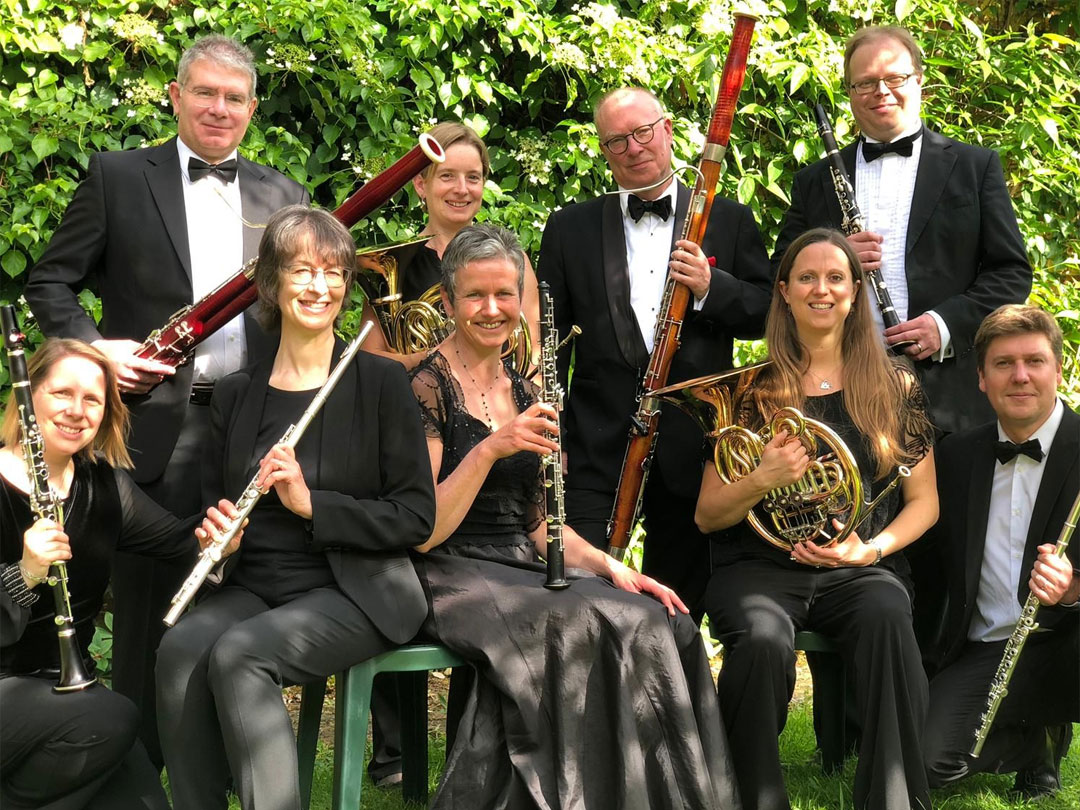 The various members of London Serenata have been playing together as the wind and horn section of Garsington Opera Orchestra for over twenty years, only emerging from the opera pit as a concert ensemble in 2019 when they decided to branch out into new repertoire and to share their music making with a wider audience. Members include:

Julian Sperry (flute) – The winner of numerous international competitions, Julian was awarded a scholarship to study at the Conservatoire National Supérieur de Musique de Paris. Currently principal flute of Glyndebourne on Tour, he has performed at many international festivals including Edinburgh, Salzburg and the BBC Proms. A guest principal with the London Symphony, London Philharmonic, City of Birmingham Symphony and BBC Scottish Symphony orchestras, Julian has recorded tracks for major films, notably on a number of the Harry Potter films, The Shape of Water and two films directed by George Clooney. A highlight of his career was working personally with the late Stanley Kubrick on Eyes Wide Shut. Julian’s recital and concerto CDs have won special commendation from the Vienna Modern Masters Performers Competition, have been selected as the Evening Standard’s Critics’ Choice, and have been chosen for broadcast on Radio 3’s Private Passions.

Katey Thomas (flute) – Katey trained at the RNCM and enjoys a varied freelance career. A winner of the London PLG 20th Century Music Series in 1986, she went on to accept permanent positions as Principal Piccolo with Birmingham Royal Ballet and New D’Oyly Carte. She subsequently worked regularly with Welsh National Opera, Garsington Opera, BBCSO, CLS and Glyndebourne Tour Orchestra. She has taught on education workshops run by WNO and Southern Sinfonia, and has also been a regular coach for the IAPS and NSSO youth orchestras. Together with harpist Meinir Heulyn, Katey has arranged and published five volumes of Flute and Harp classics, which they have enjoyed performing at a variety of functions.

Alun Darbyshire (oboe) – Alun enjoys a varied career combining solo, chamber and orchestral playing. Following lessons with Christopher Cowie and Sidney Sutcliffe,  he won a scholarship to study with Michael Winfield at the Royal College of Music.
While att the college, he won the Joy Boughton Memorial Prize before continuing his studies at the Hochschule für Musik Freiburg with Heinz Holliger. Alun is principal oboe with Glyndebourne on Tour and plays guest principal with many of the country’s leading orchestras. As a soloist, he has been featured several times on BBC Radio 3 and performed concertos with the London Festival Orchestra, Northern Chamber Orchestra and Brighton Philharmonic. With the Adderbury Ensemble, he has recorded concertos by Albinoni, Marcello and the Mozart Oboe Quartet. Other recordings include Robert Saxton’s ‘Arias’ with John Mcabe ( piano) and chamber music for oboe and strings by Hilary Tan. Alun has performed with chamber ensembles at the Wigmore Hall, Purcell Room and Bridgewater Hall and appeared at festivals such Corbridge, St Endellion, Alfriston and Alcala,Spain.

Emma Feilding (oboe) – Emma came back to playing the oboe after leaving the Royal Academy of Music to do an English literature degree at Manchester University and travel around central America. She plays regularly with the Britten Sinfonia and relishes the intimate and intense music making demanded by both chamber ensembles as well as their commitment to contemporary music and innovative programming. Emma alsoworks with many groups and chamber orchestras such as the Haffner and English Chamber Orchestra, and jumps at any chance to play with English National Opera when they perform exciting new works.

Tristan Cox (oboe) – Tristan studied at the Guildhall School of Music and Drama with Richard Simpson and Gordon Hunt, and at the Mozarteum, Salzburg with Stefan Schilli. He has since played guest principal oboe with many of the country’s symphony, chamber and opera orchestras, including the BBC Symphony Orchestra, London Philharmonic Orchestra, Philharmonia, Royal Opera House, Garsington Opera, London Sinfonietta, Britten Sinfonia, BBC Scottish Symphony Orchestra, BBC National Orchestra of Wales, Aurora Orchestra and City of London Sinfonia. As a recitalist, Tristan has appeared at a number of music societies and clubs, and has also performed concertos with London Concertante and Brandenburg Sinfonia. He is an enthusiastic chamber musician, most recently playing a programme of oboe quartets at the Roman River Festival.

Clare Hoskins (oboe) – Clare Hoskins read music at Trinity College, Cambridge, where she was a choral exhibitioner. Having then trained and worked as a primary school teacher, she went to the Royal Academy of Music as a post-graduate, studying the oboe with Tess Miller and the cor anglais with Christine Pendrill. Clare has worked extensively as a freelance player, including many years with Glyndebourne Touring Opera, Garsington Opera, and Brighton Philharmonic Orchestra. He also performs as an extra player with ENO, Royal Opera House, BBC Concert Orchestra, RPO, CLS, London Mozart Players and CBSO.

Caroline O’Connell (french horn) – Caroline read music at King’s College London, then completed a Masters degree at the Royal Academy of Music. She was principal horn of the Garsington Opera Orchestra from 2009 until 2018, and has been with Glyndebourne Tour Orchestra since 2010. Caroline freelances as guest principal with a number of UK orchestras, including Royal Northern Sinfonia, London Mozart Players, Scottish Chamber Orchestra, Britten Sinfonia and the Academy of St Martin in the Fields. She has recorded many classical and pop albums, and also records regularly for Film and TV.

Alexia Cammish (french horn) – Alexia read music at Newnham College, Cambridge and completed her studies at the Guildhall School of Music and Drama. Since then, she has established a busy freelance career and now works with many of the London orchestras and opera companies. Alexia particularly enjoys the enormous variety of freelance playing, and especially the opportunity it provides for travelling all over the world to perform in unusual and far-flung places. As a keen chamber musician, Alexia also plays as a guest with the Academy of St. Martin in the Fields and the Merlin Ensemble, Vienna. She teaches at St. Paul’s Girls’ School.

Philip Gibbon (bassoon) – Philip read History at Pembroke College Cambridge and received his musical education at the Royal Northern College of Music and the Prague Academy of Music, studying with William Waterhouse and Frantisek Herman respectively. He plays principal Bassoon with Garsington Opera and the Rambert Dance Company, as well as freelancing in all sorts of unpredictable places. He has a keen interest in chamber music, performing in concerts all over Britain and Europe, and has made numerous radio and CD recordings.

Damian Brasington (bassoon) – Damian studied music at Cambridge University and the Royal Academy of Music. He has since worked as a guest player with many major UK orchestras, including the BBC Symphony Orchestra, the City of Birmingham Symphony Orchestra and the Royal Scottish National Orchestra. He was a member of the Garsington Opera orchestra from 1997 until 2018. Damian specialises in early bassoon and contrabassoon, playing regularly with period instrument ensembles such as the Orchestra of the Age of Enlightenment, the Academy of Ancient Music and the Gabrieli Consort and Players.

Peter Sparks (clarinet) – Peter is co-principal clarinet of English National Opera, having studied at the Royal Academy of Music and Cambridge University. He has a special enthusiasm for chamber music, and enjoys collaborating with a large variety of ensembles performing at the BBC Proms, Wigmore Hall, Purcell Room and various International Festivals. He also regularly plays guest principal clarinet with many UK orchestras, including the Philharmonia and the Royal Opera House.

Sarah Thurlow (clarinet) – Sarah Thurlow studied clarinet at the Royal College of Music, where she was a pupil of Robert Hill, Michael Harris and Andrew Marriner. She went on to study with Theodore Oien at the Aspen Music School, thanks to an English Speaking Union Scholarship, and with Hans Deinzer in Italy as part of the RCM Mills Williams Junior Fellowship. Sarah founded the Contemporary Consort ensemble, which has performed at the Cheltenham and King’s Lynn Festivals, and for the Park Lane Group. As a soloist she has performed concertos with the BBC Concert Orchestra and the Philharmonia, and has given recitals at the Purcell Room and the Bridgewater Hall. She now freelances with orchestras including the RPO and LSO, and can be heard on the soundtracks of the Harry Potter and Star Wars movies.

Helen Paskins (clarinet) – Helen studied at Cambridge University and the Royal College of Music. She now has a busy freelance career which has included touring internationally with the Academy of St Martin in the Fields, BBC Symphony Orchestra, Philharmonia, Royal Philharmonic Orchestra and Birmingham Royal Ballet. As a chamber musician, Helen has given recitals with Tony Lamb, Ian Mitchell, London Concorde ensemble and the award winning pianist Ivana Gavric. She has had pieces written for her by Graham Sheen and Tony Osborne, and she has worked closely with Huw Watkins, Julie Cooper and Timothy Salter on existing works. Helen has recorded for film and television with Cool Music and the National Symphony Orchestra.